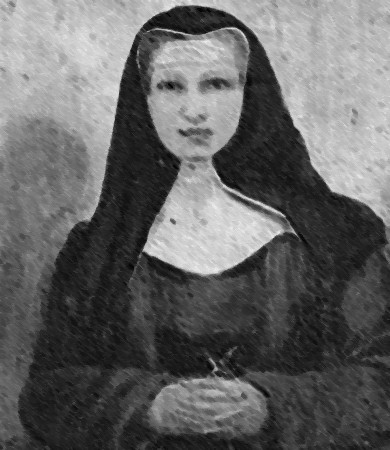 Margaret Flesch was born to a poor oil-seed miller on 24 February 1826, in Schönstatt, near Koblenz, in Germany. She was the oldest of seven. When her mother died in 1832 the family moved to Niederbreitbach, in the hope of improving their financial situation. Margaret's father died when she was 16, leaving she and her stepmother to care for her siblings. Since no social services for the poor existed then, the family was left to fend for itself.

Margaret worked as a day labourer, gathered and sold herbs and was skilled in handicrafts. The needs of the people, especially orphans and the sick were one of her major concerns, motivated as she was by strong faith in God she felt called to serve the poor, the sick and the helpless.

In Autumn 1851, Margaret and her sister Marianne moved into the small quarters at the Chapel of the Holy Cross in Waldbreitbach. They lived parsimoniously, trusting God for their daily sustenance while serving the poor and sick of the community. In addition to working as a day labourer, Margaret took in orphans and taught home economics in some of the nearby schools.

In 1856, Margaret was joined by two women who also felt called to serve the poor and sick. In 1860, the local pastor invited them and the orphans to move to premises in Hausen.

These premises proved totally uninhabitable. In the Spring of 1861 they were at last able to begin building their first house on Waldbreitbach Chapel Mountain. It was to be their residence and a home where they could care for the sick. On 11 November 1861, they moved into their first "St Mary's Home".

On 13 March 1863, with two other women, Margaret professed the evangelical councils publicly in the Chapel of the Holy Cross. She took the name of Rose. She was known henceforth as Mother Rose, the first Superior General of the Franciscan Sisters of the Blessed Virgin Mary of the Angels.

Her Congregation increased rapidly. By 1878 there were 105 Sisters serving in 22 mission homes. It was also in that year that she ended her term as Superior General. The Congregation thrived and when Mother Rose died on 25 March 1908 there were 900 Sisters and 72 mission houses serving the sick and the poor.

"It is through service to others, lovingly given", Mother Rose said, "that we reach a special fulfilment and union with our Lord".

In 1957, the cause for her beatification was introduced in Rome.