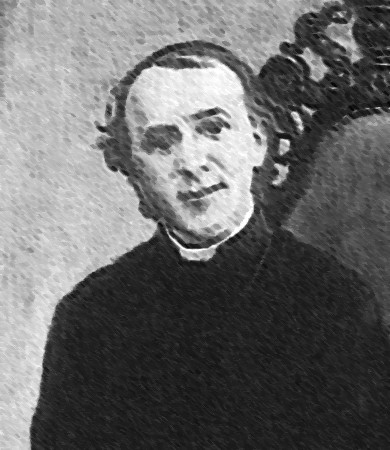 Paul Josef Nardini was born on 25 July 1821 at Germersheim, a little town on the Rhine River in Germany. His Mother, Margaret Lichtenberger, a single parent, gave him her surname at birth.

But being unemployed and therefore unable to care for her son, Margaret was obliged to entrust him to her paternal aunt, Maria Barbara, who was married to Anton Nardini of Italian origin. They gave him their surname, loved him like a son and gave him a healthy education in all aspects.

Although Paul Josef loved his adoptive parents very much, he never forgot his own mother. When he became parish priest of Pirmasens, he took her to live with him in the rectory.

From childhood he applied himself to his studies and distinguished himself from his peers for his extraordinary diligence and excellent grades.

After grammar school his vocation to the priesthood became clearer, and Bishop Johannes von Geissel admitted him to the seminary in Speyer, where from 1841 to 1843 he studied philosophy.

Fr Nardini spent the first years of his priestly ministry as parochial vicar at Frankenthal, regent of the parish of Geinsheim and prefect of the diocesan boarding school of Speyer.

On 17 February 1851 Fr Paul Josef was entrusted with the pastoral care of the difficult, poor parish of Pirmasens, a post he held until his death. During this time he demonstrated uncommon human and moral skills and piety. His example of self-abnegation, sacrifice, determination and apostolic effort was important in re-evangelizing the largely Protestant area.

His effectiveness as a parish priest, his preaching of God's Word, catechizing and love for the Eucharist combined to earn him a reputation of sanctity and the title of "Father of the Poor".

Pastoral needs, birth of an Order

Deeply concerned about the condition of neglected children and older persons, in 1853 he called the Sisters of the Most Holy Redeemer of Niederborn to assist in the education of the poor children in his parish. He also asked them to care for the sick and those who suffer from material or spiritual misery, regardless of their race or religion.

The work proved to be more than they could handle, and in 1855 they were recalled.

Fr Nardini replaced them with four young women of the Third Order of St Francis, and so on 2 March 1855 the Congregation of the "Poor Franciscans" began. Subsequently, the name was changed to "Franciscan Sisters of the Holy Family" and today they are also known as the Sisters of Mallersdorf.

Fr Nardini personally supervised the care and formation of the Sisters, securing their food and lodging, even to the point of depriving himself of a regular evening meal.

Fr Nardini's concern for others was not only material, but above all spiritual. It was exactly in performing a work of mercy, taking Viaticum to a dying parishioner on a frigid winter night, that the holy priest caught a pulmonary typhus and died on 27 January 1862.

Not only the Sisters, who at that time numbered about 220 in 35 locations, mourned his loss, but the entire local community, who already considered him a saint.

The mortal remains of Bl. Paul Josef Nardini are venerated in the Pirmasens chapel of the Congregation he founded.

The Beatification cause was begun in June 1997 in the Diocese of Speyer; Pope Benedict XVI approved his heroic virtues on 19 December 2005, opening the way to Beatification.

On 26 June 2006, the Pontiff recognized the miracle attributed to Fr Nardini's intercession and authorized the Congregation for the Causes of Saints to promulgate the Cause for his Beatification.