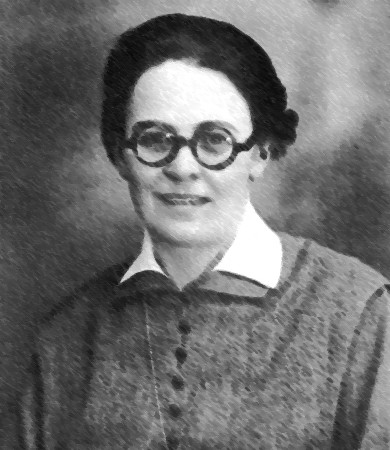 Teacher, bookbinder, milliner, journalist: this was the resume of Sára Salkaházi when she applied to join the Sisters of Social Service, a Hungarian religious society that today is also active in the United States, Canada, Mexico, Taiwan and the Philippines.

The Sisters of that new congregation, founded in 1923 by Margit Slachta and devoted to charitable, social and women's causes, were reluctant to accept this chain-smoking, successful woman journalist, and she was at first turned away from their Motherhouse in Budapest. But 16 years later, she became the Society's first martyr, at the hands of the Nazis.

Fun-loving and intelligent, Sára was born into a well-to-do family at Kassa-Kosice, Upper Hungary, now Slovak territory, on 11 May 1899. She studied to become a teacher. In the classroom, she learned through her students about the social problems of the poor, which she publicized via newspaper articles.

To widen her horizon and experience first-hand what discrimination meant, Sára became a bookbinder's apprentice, where she was given the hardest and dirtiest work. She learned that trade, then went to work in a millinery shop, all the while continuing to write articles for newspapers.

She became a member of the Christian Socialist Party and then worked as editor of that party's newspaper, focusing on women's social problems.

After she had come into contact with the Sisters of Social Service, Sára felt a strong call to join them. Following her initial rebuff, she quit smoking - with great difficulty - and was admitted to the Society at age 30, in 1929. She chose as her motto Isaiah's "Here I am! Send me!" (Is 6: 8b).

Her first assignment was to her native Kassa (which at the end of World War I had been incorporated into Czechoslovakia) to organize the work of Catholic Charities; subsequently, she was sent to Komarom, for the same task.

In addition, she wrote, edited and published a Catholic women's journal, managed a religious bookstore, supervised a shelter for the poor and taught.

The Bishops of Slovakia then entrusted her with the organization of the National Girls' Movement. She thus began giving leadership courses and publishing manuals.

In one year alone, she received 15 different assignments, from cooking to teaching at the Social Training Centre, all of which exhausted her physically and spiritually. When several novices left the Society, Sára also considered leaving, especially since her superiors would not allow her to renew her temporary vows (she was deemed "unworthy"), nor permit her to wear the habit for a year. These decisions hurt her deeply.

But Sára accepted these hardships and made up her mind to remain faithful to her calling for the sake of the One who called her. Her faithfulness paid off as she received permission to renew her vows some time later.

She wanted to go to the missions, to China or Brazil, but the outbreak of World War II made it impossible to leave the country. She worked instead as a social lecturer and administrator in Upper Hungary and Sub-Carpathia (which had also been part of Hungary until the end of World War l), and took her final vows in 1940.

As the Hungarian Nazi Party gained strength and also began to persecute the Jews, the Sisters of Social Service provided safe havens. Sister Sára opened the Working Girls' Homes to them where, even in the most stressful situations, she managed to cheer up the anxious and discouraged.

As if her days were not busy enough, she managed to write a play on the life of St Margaret of Hungary, canonized on 19 November 1943. The first performance, in March 1944, was also the last, since German troops occupied Hungary that very day and immediately suppressed this religious production.

The life of St Margaret may have provided the inspiration for Sister Sára to offer herself as a victim-soul for the safety and protection of her fellow-Sisters of Social Service. For this, she needed the permission of her superiors, which was eventually granted. At the time, they alone knew about her self-offering.

Meanwhile, she kept hiding additional groups of refugees in the various Girls' Homes, under increasingly dangerous circumstances. Providing them with food and supplies became more and more complicated every day, given the system of ration cards and the frequent air raids. Nevertheless, Sister Sára herself is credited with the saving of 100 Jewish lives, and her Community, with saving 1,000.

The Russian siege of Budapest began on Christmas 1944. On the morning of 27 December, Sister Sára still delivered a meditation to her fellow-Sisters. Her topic? Martyrdom! For her, it would become a reality that very day.

Before noon, Sister Sára and another Sister were returning on foot from a visit to another Girls' Home. They could already see in the distance, armed Nazis standing in front of the house. Sister Sára had time to get away, but she decided that, being the director, her place was at this Home.

Upon entering the house, she too was accompanied down into the air raid shelter where the Nazis were already checking the papers of the 150 residents. About 10 of them were refugees with false papers. Some were declared suspicious and were to be taken to the ghetto, while those in charge would have to "give statements at Nazi headquarters before being released".

As she was led out, Sister Sára managed to step into the chapel and quickly genuflected before the altar, but her captors dragged her away. One of the Nazis suggested, "Why don't we finish them off here in the yard?". But another gestured, "No".

That night, a group of people was driven by agents of the pro-Nazi Arrow Cross regime to the Danube Embankment. Sister Sára was among them. As they were lined up, she knelt and made the Sign of the Cross before a bullet mowed her down. Her stripped corpse and those of her companions were thrown into the river.

Every year, on 27 December, the anniversary of her martyrdom, the Sisters of Social Service hold a candlelight memorial service on the Danube Embankment for Sister Sára Salkaházi. The voluntary offering of their first martyr saved not only many persecuted Jews, but also her Religious Community.